The Northern Heat program is only three years old, but has already proven to be so successful that it will expand in 2021 to include a second age group.

The Heat program exists to build the footy IQ of players, transition them through the ranks of Senior footy, and to offer an alternate pathway. The program includes video analysis, strength and conditioning training, and match play against the Southport Sharks club that competes in the VFL.

From previous programs, players have been invited to trial with the Southport VFL team and have been offered chances to join the Sydney Swans Academy Top End Program.

Paul Taylor, Community Football Manager, said the Northern Heat program has proven to be a real success story. “The focus of the original Heat program was to transition players from the Under 17 ranks into Senior club footy and we’ve achieved that with an outstandingly high retention rate. Adding to that has been the value that the Southport Sharks have placed on our program which has been demonstrated through the invitations they’ve extended to our players to trial, and through their commitment to playing us each season.

“Throughout the most recent program we’ve been approached by administrators, coaches, and parents to ask about running a similar program for Under 15 players. Both Leagues are fully supportive of providing this additional opportunity, so the new squad will operate on the same model as the Under 17 program and will focus on transitioning players into Under 17 club footy.”

The selected squads will train three times between October and December, will receive a strength and conditioning program to cover the December and January period, then will train a further three times between February and March. Training sessions will be conducted between venues in both the North Coast and North West.

Both programs will conclude with a match against the Southport Sharks which is expected to be played in late March.

Opportunities for program staff to nominate to be involved with each age group will be offered soon.

Swans go purple for Pancare Round 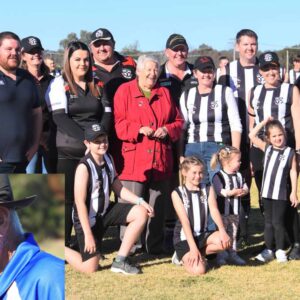 Moree Suns excited to host Indigenous Round match and auction