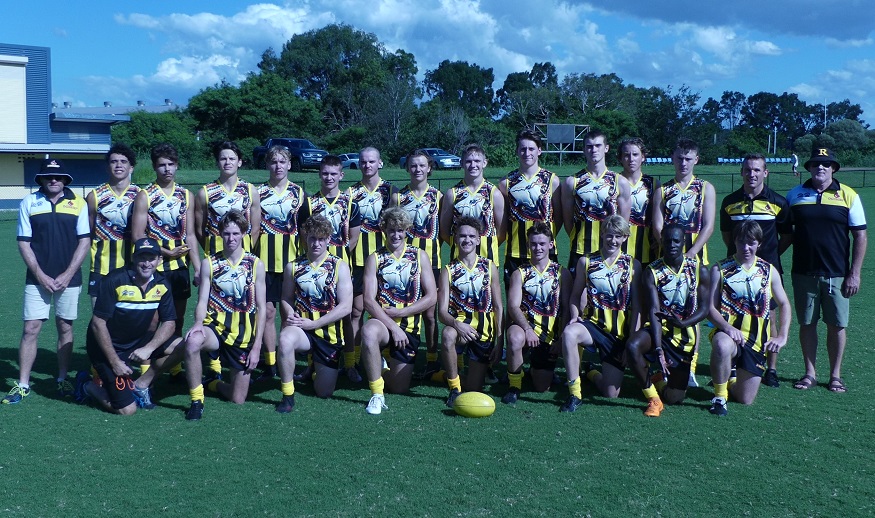 The Northern Heat squad overcame an extremely challenging week of venue changes, time changes, and a COVID outbreak to record an outstanding victory against Southport/Beenleigh Colts.

Brisbane’s COVID outbreak saw yet another time and venue change made late on Friday night, before the outbreak also threw up doubts about the ability of the match to proceed on game day. The squad showed remarkable resilience to ignore all of these distractions and put together a thoroughly professional performance once they were finally able to get onto the park.

The game plan was to rely on moving the ball forward by handball as had been practiced since the start of the program. In the first five minutes the squad forgot about this and relied on long kicks forward, however the first goal of the match to the Heat in the fifth minute saw the squad settle and from that point on they took the advantage in both possession and territory. Four goals to one in the opening term was a just reward for the Heat’s efforts.

In the second quarter the Heat stepped up the intensity and kept Southport/Beenleigh scoreless, whilst at the same time adding a further four goals to their own scoreline.

The team played their best footy in the third quarter and really dominated all key statistics during this period. Southport/Beenleigh struggled to lay a hand on the Heat players as they booted a further six goals to one and extended the lead to over 80 points.

The Heat struggled to maintain their intensity early in the fourth quarter, however the superior fitness gained from completion of their summer strength and conditioning program saw them run over the top of their opponents in this quarter. Without playing their absolute best footy the Heat added nine goals to none as Southport/Beenleigh wilted in the face of the relentless onslaught.

From the match, Mikey Luxton (Grafton) was deemed to be best on ground for the Heat and received the Martin Medal. Jack Dadd (Tamworth) received the Anderson Medal for most committed to the program.

Paul Taylor, Community Football Manager, praised all involved with the program. “The players and their families make a huge commitment to be involved in the program, travelling hundreds of kilometres to slog it out over summer so that they can be fitter, better players with a higher footy IQ.

“This year we’ve faced huge challenges with both our last training session and the match due to the weather and COVID, but today is a just reward for all of the hard work they’ve done individually and as a group and each and every one of them is extremely well prepared to have their best season of club footy.

“Huge thanks to the Southport VFL club who worked tirelessly so the match could go ahead. They could easily have pulled the pin through the week but the feedback from the club’s General Manager is they really admire what our program is achieving and wanted to make sure that the match would proceed.”

This concludes the Heat program for 2020/2021. The players will now focus on club footy, then later in the year will have the chance to switch into representative mode with the North Coast Force and AFL North West rep teams respectively. The next Northern Heat squad will be selected based on the performances of players in their local rep programs.

lNorthern Heat match is on!
‘Shoosh for Kids’ returns in 2021r

Round 2 Around The Grounds