GUNNEDAH”S men’s team recorded its first win of the season after a tight tussle at Moree.

The Bulldogs again got off to a slow start against the Moree Services Suns/Narrabri Eagles and were trailing by 8 points at the first change before kicking into gear.

With Mark Ewington providing a focal point n front of goal and Adam Curgenven providing plenty of drive, the Bulldogs kicked five unanswered goals in the second term to turn the deficit into a 20 point lead at half time.

The home team refused to throw in the towel though and produced its best football of the season in the third term. Branden Barker was a constant threat for the Suns/Eagles and helped his team kick six goals to three in the quarter to get right back into the contest.

The contest could’ve gone either way and both teams had five scoring shots in the last quarter but it was Gunnedah with 2.3 to 0.5 who grabbed the four points.

Ewington’s presence in front of goal late proved vital and it was his seven goal haul that proved the difference between the two teams.

Gunnedah’s women also recorded a victory but the 54 point margin wasn’t a true indication of the match.

At the last break the Bulldogs led by just 26 points. Spurred on by Gyarn Waugh’s three goals as well as strong performances again by Katrina Rekunow and Alice Mitchell, Gunnedah was able to draw away to remain undefeated.

The Swans women were happy after recording their first of the season on Saturday.

The Swans had a tough start to the season facing Inverell and Gunnedah in their opening two matches but they managed to get a first win after a close battle at home against the New England Nomads.

The second term when the Swans kicked five goals to two proved the difference between the two teams considering the final margin of 18 points.

Erin Allan was the star of the day kicking eight goals for the Swans while Molly Martin was the best player for the Nomads kicking four goals of her own.

It’s possible the Swans men will be doing some goal kicking practice at training this week.

Facing an undefeated Nomads outfit in the match of the day, the Swans started fast and led by 29 points at half time. The margin could’ve been greater if it wasn’t for inaccuracy in front of goal. In the first half the home team kicked 8.13.

It gave the Nomads a sniff but try as they did they couldn’t quite get close enough on the scoreboard to mount a serious challenge.

Some inaccuracy of their own in the later stages of the match left the Nomads rueing the loss.

Josh Jones and Kaleb Crowhurst both kicked five goals for the Swans while Fraser Menzies continued his hot early season form for the Nomads with seven goals of his own.

SAINTS AND ROOS TO MEET LATER

Inverell was fixtured to play at home against the Tamworth Kangaroos on Saturday but more than two inches of rain at Varley Oval on Thursday night saw the ground closed.

The Saints and Kangaroos will now play catch-up matches on July 30. 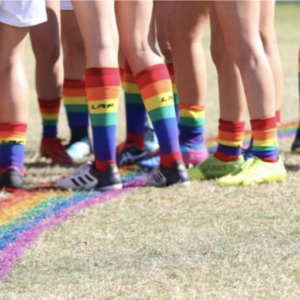 Get involved with Junior rep footy at Coffs carnival

Bags of goals the order of the day